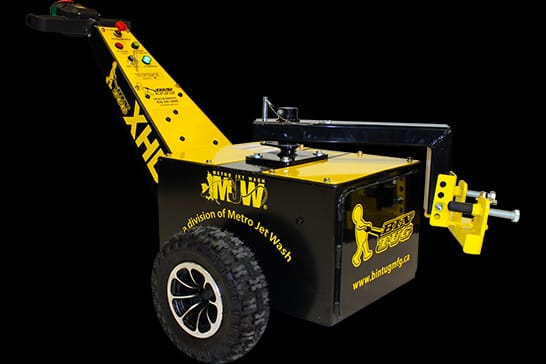 The Bin Tug XHD works very similarly to the standard unit, except for a few key features. It is equipped with a larger and stronger electric transaxle. This allows a pushing or pulling maximum capacity of 2,500 kgs, 500 kgs more than the standard Bin Tug. It’s also equipped with a main controller onboard fault display and a right-hand/left-hand tiller control handle.

All of the controls on the Bin Tug XHD are located on the control handle itself. This model does not offer a speed control switch, but instead is controlled through the amount of rotation on the rotary thumbwheels positioned inboard of the handles. The direction is also controlled this way.

Controlling the Bin Tug XHD with the Thumbwheel 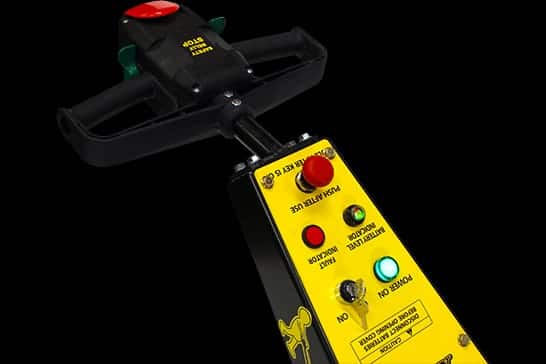 Using your right or left hand, rotate the thumbwheel in a forward motion (away from the operator) to make the Bin Tug XHD move forwards. Reverse rotation (toward the operator) will make it move backwards. This control handle is equipped with a safety belly stop button, which works in the same way as the standard model. When the unit is moving in the reverse direction, should the button be gently pushed, the Bin Tug XHD will immediately switch to a forward direction, and stop when pressure is removed from the button. This will prevent the operator from being accidentally crushed between the unit and an object. All other functions and procedures are the same as the standard Bin Tug.

To request a Bin Tug Owner’s Manual, please fill out the form and one of our representatives will get back to you shortly.
© 2021 Bin Tug. All rights reserved.
Terms of Use | Privacy Policy | Site Map